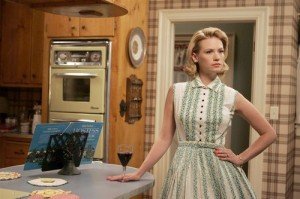 [Molina, Genaro — – LOS ANGELES, CA – JULY 8, 2008 — Actress January Jones stands in the kitchen of her character Betty Draper on the set of the AMC television series, “Mad Men,” at Los Angeles Center Studios in Los Angeles on July 8, 2008. The actress wears a dress designed from fashions from the early 60s which is the era of the award-winning television series.] *** []